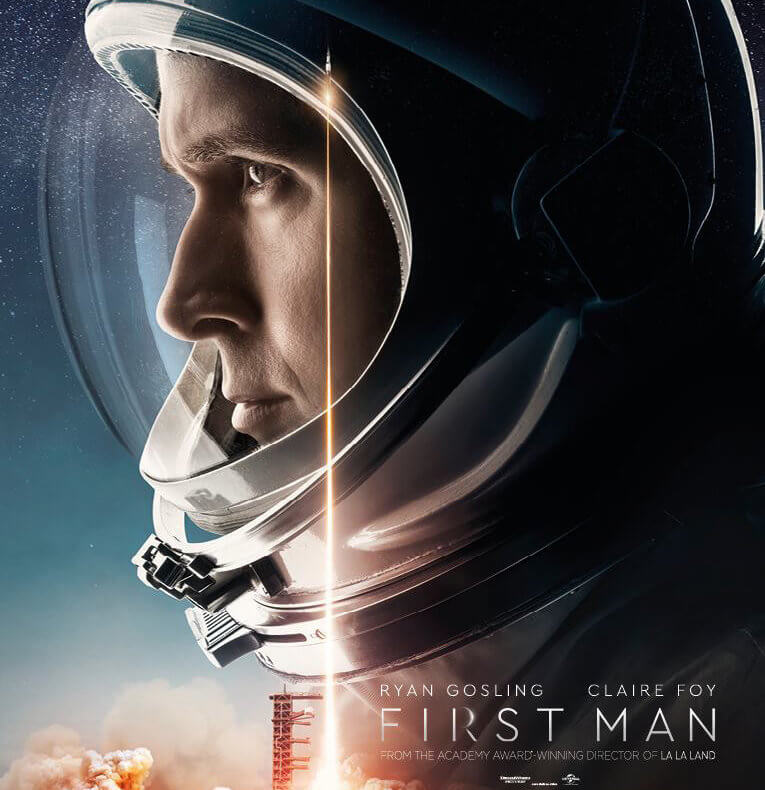 By everything that makes logical sense, a big budget movie about the life of Neil Armstrong should be the next saga in the vein of gigantic, epic, “based on a true story,” hero movies. To its credit, First Man doesn’t care about being epic, relating history or mythologizing a man that actually walked the Earth, and the Moon, for that matter. The result is a very small, intimate story that truly is about an individual. This, ironically, makes the film more epic than it would have been if it had been aiming for grandiose throughout its entirety. To say that the film isn’t concerned with being gigantic in scope is not the same to say that it is void of the grandiose. Director, Damian Chazelle, shows off his musical chops with several boisterous sequences with solar landscapes amidst dramatic music. Every single one of these moments is so intensely grounded in real people, though, that it in no way takes over from the very small relationships and motivations.

How this film avoids all of the temptations of popcorn stuffing, fly the American flag from the back of my pickup sentimentality is fairly astounding. The opening is at least as emotional as watching the opening of Up, except in real life. The performances across the board are nuanced and understated, every single actor knowing when to get bigger and to what degree. Ryan Gosling and Claire Foy are fantastic in the lead roles, not a shock to anyone, but it’s the periphery that brings the whole thing home. Jason Clarke, in particular, is really great here, opting to let the audience read his eyes than hear his voice. The cinematography is perhaps the single most interesting factor that makes the film less accessible than your normal blockbuster fare. It is mostly handheld, shaky, very shallow focus, and every shot is ridiculously tight. The images have texture that I have to assume is the result of using film or some of the best digital image processing I’ve ever seen.

Following La La Land, which I very much enjoyed, I assumed that Chazelle was a one trick pony, albeit a great trick. With First Man, I get the sense that Chazelle is still looking for his footing as a filmmaker. One doesn’t necessarily get the feeling of an individual as much as an individual searching for who he is going to be on the big screen. One thing that First Man has convinced me of, though, is that once Chazelle does find his footing, it will be exciting, because thus far, his searching has created some of the best movies of the past several years.

I have always been interested in what motivates people to make decisions in their lives. Some, it appears, choose what they do based solely on conditioning, being programmed from a young age to make particular decisions in particular situations. Others base decisions on a set of virtues that they have come to appreciate, learn about, and seek to adopt. An individual wishing to be more forgiving, for example, would most likely wish to forego their conditioning of holding a grudge in order to forgive someone in a single instance. That single instance becoming more and more instances that follow resulting in the individual successfully becoming a forgiving person. The motivation that seems most prevalent in my world right now, both from the outside looking in as well as the inside looking deeper in, is the motivating factor of insecurity.

Insecurity manifests itself in a myriad different ways depending on the people involved as well as the situation at hand, but it carries with it a marker; that marker being self- absorption/self-focus. Oddly enough, it becomes the times that we are trying to hide who we truly are that we become completely self-absorbed, unable to focus on the needs, desires, dreams, or concerns of others. The inverse is also true; when we choose vulnerability, allowing others to see the good, the bad, and the ugly of our true selves, it allows us the ability to become more outwardly focused. By focusing on the needs and perspectives of others, we inadvertently learn more about ourselves and God. In his book, Falling Upward, Richard Rohr writes, “Falling, losing, failing, transgression, and sin are the pattern, I am sorry to report. Yet they all lead toward home.” I went to a conference last year where they shared that a driving mission statement of the organization was the idea that, “If dependency is the goal, then weakness is an advantage.” We are often taught to hide weakness and adopt confidence, whether it be genuine or false, it doesn’t matter, and give the impression we know what we’re doing. The issue is that by acting like we know what we’re doing, knowing that we don’t know, creates a great deal of anxiety. This is a large reason why people hate church. Church is a hotbed for this type of pressure. At Watermark, it meant that leadership of the church was encouraged and asked to confess weakness and failings to the church, in order to foster a culture where all of the people were willing to do the same. The result is a gigantic sigh of relief. When someone is willing to be ok sharing the cracks in their armor, it makes it easier for the rest of us to relax in knowing we don’t have to put on a show; we can be honest.

Vulnerability is terrifying, and the first “confessor” always runs a great risk of being taken advantage of. To hide in insecurity is still worse, however, than the worst “confessor” scenario because it means that we live our lives in solitude. Perhaps we are physically around others all the time, but if we cannot be vulnerable, it means that we are simply hiding in plain sight. The decisions that arise out of that insecurity are troubling as well and often lead to disaster. We should stop hiding. Being vulnerable is a loving act for everyone around you. It’s an outstretched hand offering freedom. It is precisely the type of thing Jesus refers to as “dying to oneself.” The bondage we all often exist in is self-inflicted, but there is a terrifying step we all have the opportunity to take to be free of our chains. By taking that step, we help others to do the same.

“Love only happens in the realm of freedom.” – from Falling Upward by Richard Rohr