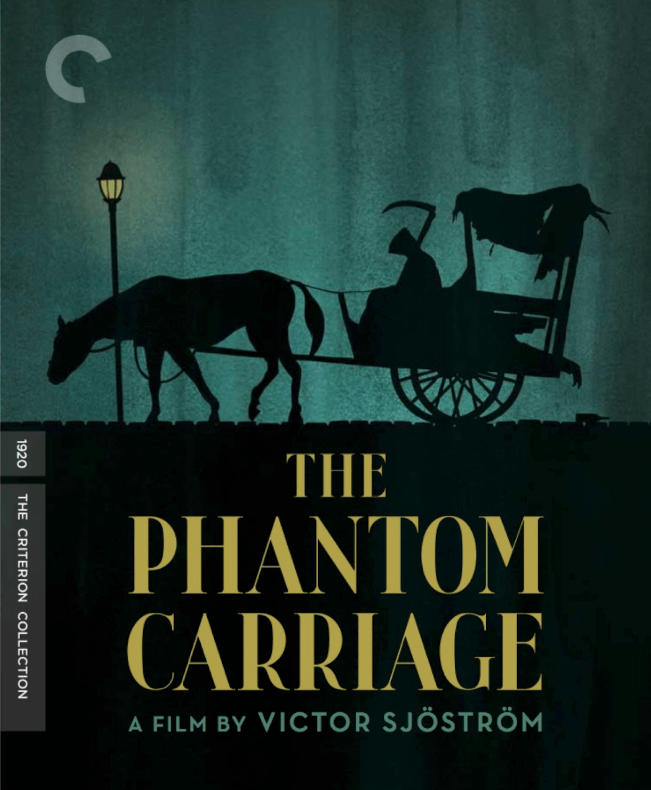 In the history of film, there are a few names that are treated with respect and even reverence. One of those names is the great Swedish director, Ingmar Bergman. Bergman’s legacy is integrally tied to the art of cinema itself and will not be undone for any length of time imaginable. The Phantom Carriage is the reason that Ingmar Bergman began making films in the first place. If this were the only legacy of The Phantom Carriage its very existence is justified. Victor Sjöström, the star and director of The Phantom Carriage, while not as prominent today as Bergman, stands as one of the all time great cinema figures, both as a director and actor.

Death arrives on a ghastly carriage drawn by the skeleton of a horse and appears to a drunkard and forces the man to reflect on his wretched past.

While it is a rare occurrence, one occasionally comes across a story that can only be told through the magic of cinema. There are many stories that are aided by what film can offer, but few that seem to require film in order to be told at all. The Phantom Carriage is a film that not only requires cinema as an art form to truly be expressed, but requires silent cinema to maximize its effectiveness. The Phantom Carriage reminds one of the ghostly stories of Dickens, mixed with the brilliant storytelling devices of It’s A Wonderful Life, combined with a bit of Bergman’s honesty, and add a dash of Chaplin’s heart. Bergman referenced not only director Victor Sjöström as a primary influence but specifically The Phantom Carriage as one of the primary reasons he began making films.

The magic of The Phantom Carriage, in my opinion, is primarily threefold. Firstly, the story is told in such a way as to reach great dramatic and suspenseful heights. Sjöström‘s pacing and deft ability in creating his characters sucks you in to the heart of what is happening on screen. Sjöström, himself playing the lead character, David Holm, shows why history will always remember him firstly as a brilliant actor (as the lead character in Ingmar Bergman’s Wild Strawberries). In addition to Holm, there is not a single entity onscreen in The Phantom Carriage that is not fully realized and believable, making the world of The Phantom Carriage a palpable, visceral place. The magic of Sjöström‘s world is further heightened by the film’s unbelievable special effects. Still holding up by today’s standards, when the viewer sees a transparent ghost rise from the former living physical body, it’s jarring. I can only imagine the effect this would have had in 1921. Lastly, the music in Phantom Carriage could stand alone as a powerfully emotional experience. Everything happening on screen is compelling and enchanting but the sensation of the visual with the auditory is downright euphoric. The Phantom Carriage embodies everything that cinema is capable of and heightens every aspect. It doesn’t just simply tell the viewer what it wants to communicate but sears its message in the dark recesses of the heart; “Lord, please let my soul come to maturity before it is reaped.”

I have been a lover and participant of music since I was 13. I remember when I first started learning I would continuously seek find someone, anyone willing to play guitar with me. I was interested in physically seeing what it looked like to play for real so that I could have something to try and emulate. What I found very early on is that some people are happy to come alongside you and help you learn while others treat you as a burden and inconvenience. A common trait for those that were willing to come alongside was that they were very often far superior musicians than those who were less patient and considerate. Soon it became apparent that in order to become a great musician, one thing to emulate was the simultaneous attitude of both a confident teacher and an eager student. The best musicians I have ever known were teachers. They would read on my face a question and call it out of me so that they could seek to answer it with excitement and patience. They were always the first to admit, however, that they didn’t know very much about music, in general. A common theme among these musicians was the idea that the more they learned, the more they knew how little they knew. This was, for them, both slightly depressing and exhilarating all at the same time. It appears to me from my current vantage point that maturity comes about with the knowledge of a lack of knowledge. For the immature individual, this revelation is so disheartening that they either escape into a denial, which often appears like a strong self confidence, or become greatly depressed at the revelation of their own inadequacy. This is the point where one would be tempted to put the guitar down and walk away to something less exposing, like a “real job.” For the mature individual, however, this revelation can be exhilarating. When approached from the proper perspective, finding out that your accomplishments and knowledge are only beginning to scratch the surface means that this rabbit hole is far deeper than you could’ve thought possible. That means that bigger, greater, more exciting revelations are ahead! The more you know the less you know. The more you learn the more you’re unaware, and can help others become equally wise, and unaware.

8 Last of all, as to one untimely born, he appeared also to me. 9 For I am the least of the apostles, unworthy to be called an apostle, because I persecuted the church of God. 10 But by the grace of God I am what I am, and his grace toward me was not in vain. On the contrary, I worked harder than any of them, though it was not I, but the grace of God that is with me. 11 Whether then it was I or they, so we preach and so you believed. 1 Corinthians 5:8-11 ESV

12 Not that I have already obtained this or am already perfect, but I press on to make it my own, because Christ Jesus has made me his own. 13 Brothers, I do not consider that I have made it my own. But one thing I do: forgetting what lies behind and straining forward to what lies ahead, 14 I press on toward the goal for the prize of the upward call of God in Christ Jesus. 15 Let those of us who are mature think this way, and if in anything you think otherwise, God will reveal that also to you. 16 Only let us hold true to what we have attained. Philippians 3:12-16 ESV

1.  Given the chance to see the outcome of my poor decisions, what would I do differently starting today?

2.  What feelings arise out of you upon seeing Death personified in the film?

3.  While it’s easy to point at things like alcohol as the primary culprit of Holm’s demise, what do you think is really causing his use of substances as a coping mechanism?

4.  What is the scariest thing in The Phantom Carriage to you? Why?

5.  What is the most hopeful or beautiful thing to you in The Phantom Carriage? Why?

7.  In Luke 1:79-80, does the prophecy about John the Baptist sound like the role of Death in The Phantom Carriage?