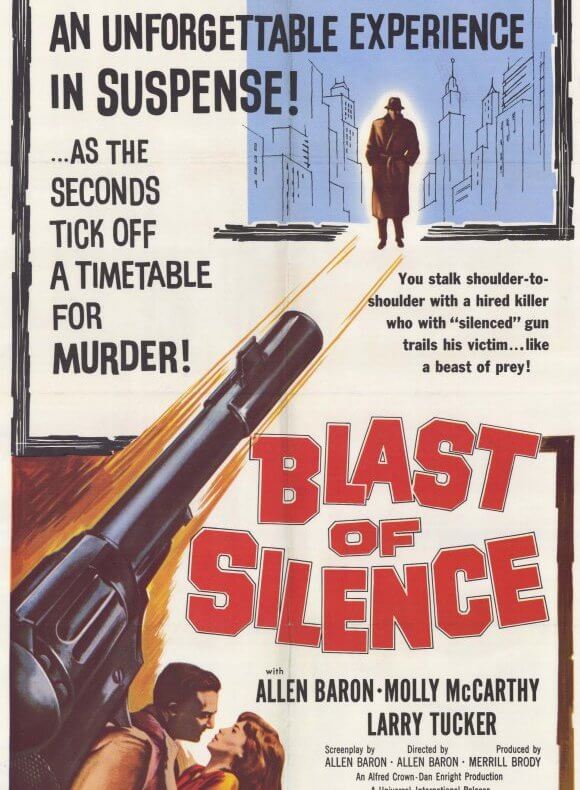 To sum up Blast of Silence in a few words I’d call it a sincere, complex, character based noir film. Written by, directed by, and starring Allen Baron, this film follows a gun for hire named Frank Bono on his latest job. Where the film gets interesting is when this solitary figure who loves to be alone meets up with several people from his past. He is thrust into relating with other human beings. The result is an interesting one in that these seemingly normal people who show a genuine interest and care for Bono actually begin to make him second guess his career.

Through expert use of voice-over, the viewer is given a fully three dimensional view of Bono and his motivations and his character. We get that he grew up in some kind of strict Catholic school or orphanage, we get that he is a perfectionist, and we also get that he is full of hate. Much of the beginning of the film deals with this hate and how Bono needs to create a hate for his victim. He does this by pointing out his victim’s flaws and misdeeds, ironic since Bono is planning to kill him in cold blood. The character of Bono is defined by contradictions. He is a killer who is convinced that he could’ve been an architect or an engineer. He is also a man who desperately wants companionship but when he can’t get what he wants when and how he wants it he reacts with anger and violence. The more interesting aspect of Bono’s character comes in the form of the voice-over. The voice-over speaks directly to Bono using words like “You” when discussing Bono’s motivations and concerns. The voice also, however, speaks internally to Bono, inside his thoughts suggesting that the narrator is somehow Bono’s conscience or psyche realized for the audience. It creates a very unsettling dynamic that helps give the film its overall mood.

There are two more aspects to the film that give it a very unique perspective and vibe. One is the brilliant camera work shot in absolutely beautiful black and white. Baron was a novice when it came to the practical side of filmmaking by his own admission. Being a cartoonist, however, comes through in Baron’s composition and his use of light. The end result is carefully constructed compositions that have a very relaxed and almost youthful quality to them. This helps give them professionalism of a seasoned director with the energy of a young filmmaker. The quick cuts next to the very long shots also help to give the film an unpredictability that makes it very exciting to watch.

The other aspect of the film that certainly plays a large role to its overall mood is the incredible jazz music that Baron employs. Much of the film is accompanied by very quick be-bop jazz music that further adds to the energy and the unpredictability. This is noticeably odd at first especially if you have seen many films of the noir genre. One expects very dreary, ominous, lonely music. When the quick, upbeat music of Blast of Silence hits your ears it is almost a jolt.

What I appreciate most about this film is the way it portrays New York City. I am almost constantly frustrated by the romanticism that New York is portrayed in the films of Hollywood who make it out to be some kind of urban utopia. When I have had my feel I need a steady dose of filmmakers like Scorsese and Baron who show New York in a light that more closely reflects my own personal experiences of visiting the city. Choosing to shoot mostly in Harlem, the film looks like the real New York City. Baron, obviously aware of the contrast of the ideal NYC and the real NYC plays with this in several shots like when Bono, the killer, is a silhouette walking in front of the Christmas tree in Rockefeller Center. This image alone is even more contradiction to add to the mix.

Allen Baron’s Blast of Silence is incredible natural filmmaking at its best. It appalls me to think of everything Baron is able to accomplish on a shoestring budget and in only 77 minutes!